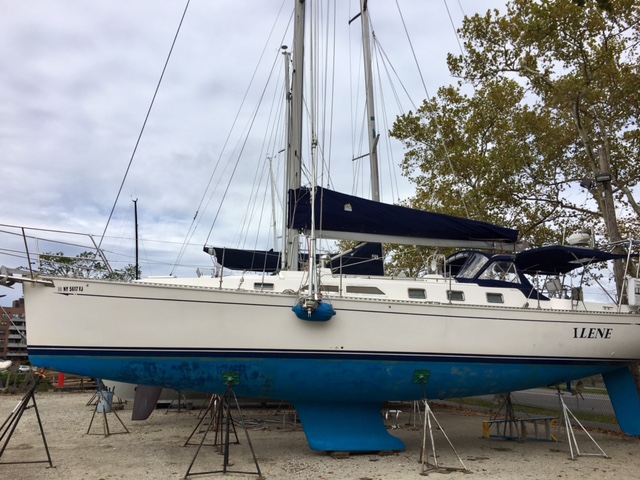 Yes, the season has come to its end. The blue object just below ILENE's deck line and just aft of her mast is a fender being used to protect the boat from the two roller furler drums at the foot of their fore stays. The stays are hanging off the port side so that the boat could fit, lengthwise, into the travel lift.

We did get in one last Old Salts sail, aboard ILENE with eight others plus me. All are regulars except Frank, our new Rear Commodore, an amazingly able engineer, who we enticed to join us. Everyone who wanted to had a hand at the helm. We motored at both ends within the mooring field but sailed all the rest of the way --  into Little Neck Bay, out to near under the Throggs Neck Bridge, back to Kings Point and then a beat home. Using main and only the small jib, and with her bottom very dirty, she achieved 6.5 knots.

We spent a day having a delicious lunch that Jim and Cate served to us in Chatham NJ. Jim has retired from sailing. I miss him as a sailing companion aboard ILENE and his Aria.

The fall work party was well attended with a good breakfast and lunch. Does the phrase: "I work for food" apply? I "policed the yard" picking up bits and butts, and then helped drag a lot of junk to a large dumpster and joined the crew cutting the expensive new wood that is being formed into a strong and decorative railing for the sides of the elevated dock and fastening the pieces to each other and to the posts. a whole lot of power tools were in use. I was Third Assistant to the Helper but contributed. I helped strip Jazz Sail's sails and showed Lloyd and Rhoda how to fold them on the ballroom floor -- so tiny. At the membership meeting that night the issues were rainwater drainage from the new gargantuan catering hall being erected six inches from the back of our locker house and storage of masts of J-24s, which, when laid fore and aft atop the boats, make them a lot longer than 24 feet.

And the annual Going Out of Commission was the next week. during that day I stripped off the two head sails so that their stays would be more manageable, folded the small jib on the boat, took both sails ashore and put the small one in the locker and stuffed the genoa in the trunk of our mini-SUV because the ballroom folding floor was set for the night's party, precluding proper folding. Then showered and changed into party clothes, met up with Lene and attended the affair. I was honored to have been selected by the adult children of Josh and Leticia (they had scattered their parents ashes from ILENE in the fall of 2015) to place the paving brick commemorating their parents' names in the patio surrounding the flagpole during the ceremony. The food was unusually good and typically plentiful during the cocktail hour, the dinner and the desert hour. This was the 134th such annual party and they are all the same but this one seemed better. The weather cooperated.

Aong and following the one Sail date and the three Other dates during the time period of this post were four Work days (23.5 hours). I set up the license plate number stencils and those for the dink's name ,"ROJAY", and bought a very cheap tiny artists paint brush. But the instructions said that I should use the stencils only to trace the pattern and then paint them in freestyle, to prevent the paint running under the stencil and making a mess. Well from less than a yard  away the lettering looks rough, but further away it looks quite acceptably neat. Now the test of time will be how well this expensive specialized paint adheres to the hypalon surface. The back door to the swim platform is finally secure again and the job looks good. I want to remove the hex nuts, fill them with blue Locktite and reattach. One minor problem is that the latch at the starboard side of the door no longer is well aligned now that the hinges at its port side are tight. So the plan is to close this latch before the final reattachment and tightening of the hinge bolts.
I managed to get the genoa up to the empty ballroom, and properly folded and carried to the upstairs locker.   Less success with the mainsail once it was removed. I needed help navigating the locker house stairs and Harry was there to help me out. Thanks, Harry!

Hauling day was a long one, leaving the house at 6:45, taking the dink to ILENE (it was before launch service started)  attaching the dink to the mooring bridle and motoring the five miles to the Huguenot YC. There the crew detached  the headstays, hauled the boat. power washed it (pretty good condition though in need of a slight abrasive scrub and two coats of ablative bottom paint) and set it down on a large piece of paper so I could trace the bottom of the keel as a template to be sent to Mars Metals in Canada for its new lead "sole". Then two buses back to City Island  to get the car and drive home. A long hard day.

ILENE is blocked in almost the same spot as last winter, her headstays reattached and tightened up, her wheel and removable side stanchions and lifelines removed and stowed, twelve gallons of diesel poured into the fuel tank we had been using since Clinton, CT. The only things needed to be done before it gets very cold is the winter cover installed and the water systems winterized. I have an appointment with Lene to come up and help me with this next week after we spend a weekend with Lianne in the Berkshires.

And oh yes, I had the pleasure of spending a week with my granddaughter, left, and daughter, right, in Portland Oregon. Nothing watery about that trip except for the frequent rain, but they are great kids, if I do say so myself. 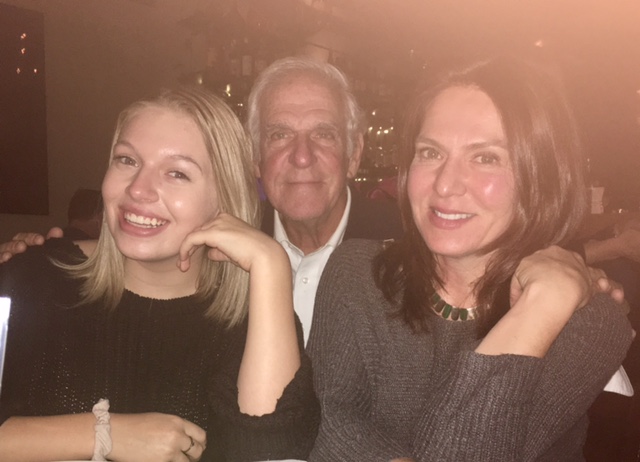 The season is drawing to a close and after the 87 day cruise, my craving for sailing has waned with my energy so that I have not been aggressive in filling up my calendar with sailing dates.
Then there were some recovery from stomach flu days, days for doctors appointments, for Yom Kippur, for the funeral mass of the Commodore's wife's mom, a movie, cleaning, and an unsuccessful attempt (so far) at the repair of the swim platform door (I need longer bolts). Our last night aboard for 2017 was Tuesday, October 3.

But three lovely sailing days with just the right winds. First was aboard ILENE, with Sid and Jan. He worked with me, practicing a more commercial and less litigious type of law and has just retired; so now they both are available for weekday sails. We were underway for five hours and went out almost to Peningo Neck at Rye. On the way out I changed course by up to 30 degrees, about five times to keep the wind away from our stern. Lots of conversation about the bad old days and our other colleagues before some wine followed by dinner at Artie's, what with the Club restaurant being closed on Tuesday, and just in time to get the last launch ride back to the boat.
Next day being Wednesday, I returned to the boat to pack up more things and for the Old Salts. 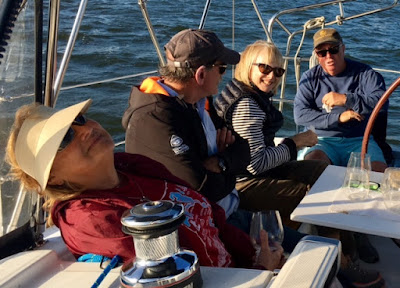 Nine of us, including Erwin, a founding member of the Salts, visiting from Florida, sailed on Bennett's Ohana which handled the winds gracefully. About two hours of zigging and zagging in the Sound between Eastchester and Littleneck Bays, before the libation hour. Mike and Sandy gave me a ride home .
The next day Rhoda invited me to sail with her on Jazz Sail. I was going to the Club anyway to pack up almost a;ll of the rest of our things and we had a great two hours under genoa alone, into Littleneck Bay and back.
These autumn sails were so pleasant. We did not have the storms of autumn and it got Indian summer warm. The kind of weather which makes a person try to keep going later into the season. The only problem is the knowledge that the bitter cold grey days of winter are breathing down our necks and hauling and doing the other work needed to prepare for winter when it is ugly and cold is not pleasant. So my target hauling date is Monday October 16, giving me two more days after before I'm flying to Oregon to visit family and friends there. Another plan, waiting to be upset by events.
Posted by Unknown at 3:51 PM No comments: 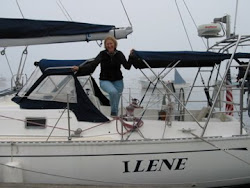 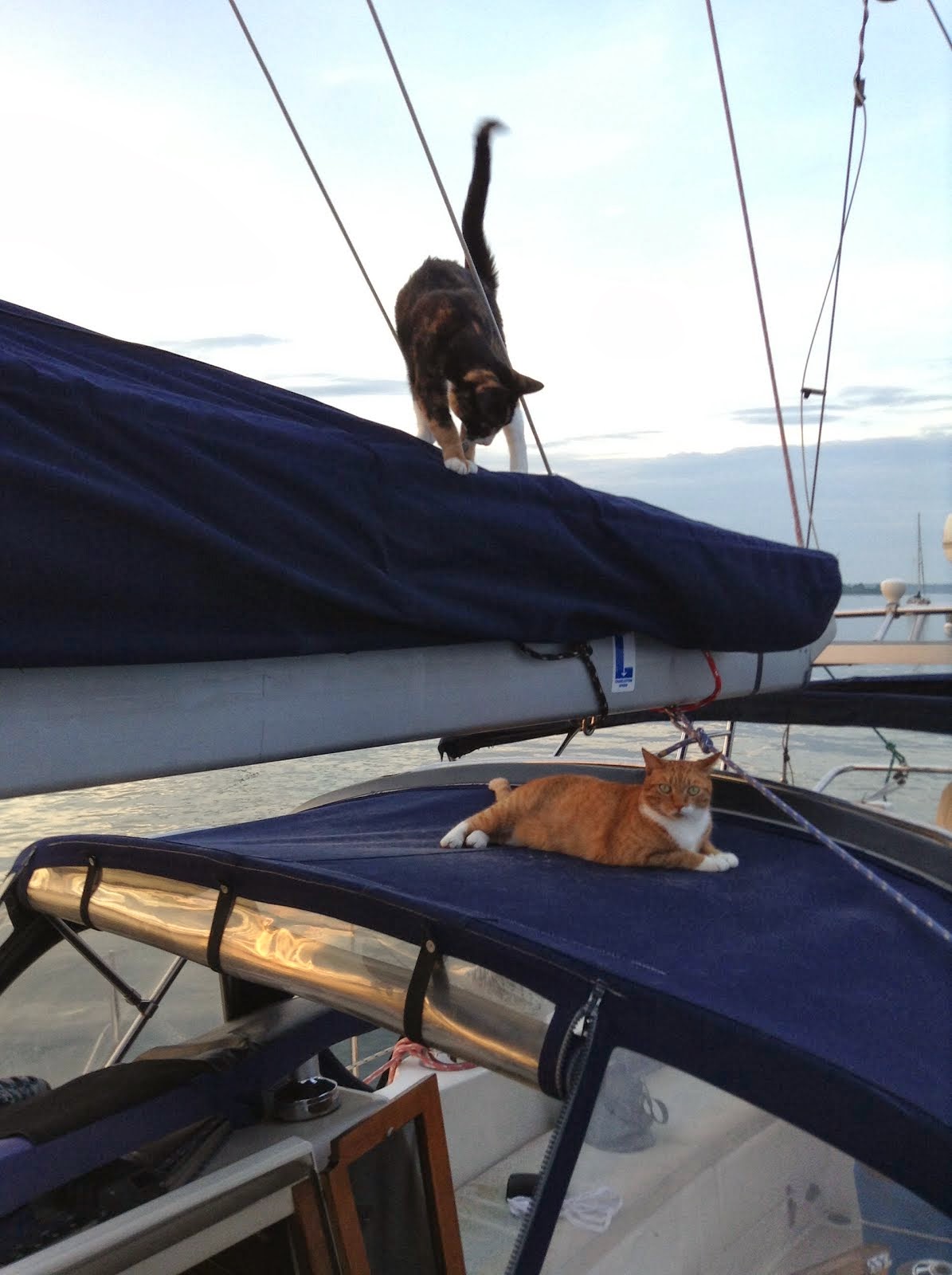